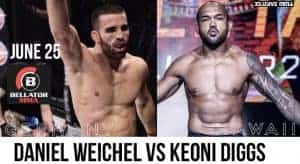 Weichel (40-12 MMA, 9-4 BMMA) looks to rebound from a November unanimous decision loss to Emmanuel Sanchez in the Bellator featherweight grand prix semifinal. The defeat was Weichel’s third in four fights. His lone loss in the stretch was a unanimous decision over Saul Rogers in the opening round of the tournament.

Diggs (9-0 MMA, 2-0 BMMA), meanwhile, has not competed since September. He was scheduled to fight Mandel Nallo at Bellator 255 in April but withdrew for unknown reasons. In his nine professional fights, Diggs has accumulated seven finishes, with six submissions and one TKO.